Artsgraphique.com can provide professional quality artwork for just about any requirement, in any format. Please email the above address to find out more.

Calendar artwork: paintings of fourteen of the most famous pubs in St Albans

The Hertfordshire city of St Albans is known not only for its Roman history and its cathedral (originally a Norman abbey) but also for its large selection of traditional public houses, or pubs. 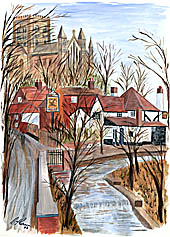 For hundreds of years St Albans was the first stop on the main coach route north from London, one day's horse ride away, and from the Middle Ages onwards has had one of the highest concentrations of coaching inns in Britain. Around fifty pubs remain in the town, including the fourteen shown here in twelve paintings (originally painted for use as a calendar).

The paintings show, in descending order: The Goat (one of several 15th-century pubs remaining in St Albans); The Lower Red Lion; The Fighting Cocks (one of the oldest pubs in Britain, with foundations dating from the 8th century); The Boot; The Jolly Sailor; The Fleur-de-Lys (also dating from the 15th century); The Six Bells; The Rose & Crown; The Black Lion and The Blue Anchor; The White Lion; The Cock and the Blacksmiths Arms; The Farriers Arms, where the Campaign for Real Ale (CAMRA) began in 1972.

The artist can be contacted at: roscoe@artsgraphique.com